What a crazy long Winter and up and down Spring!!  I think that we have finally broke the cold and are seeing seasonal temperatures.

It is snowing and a blizzard up North as I type this.  Every spring is different!  Weather is CRAZY!!I state this because the weather is a very important factor in Beekeeping.  A very cold winter can be really hard on the bees, but it is mostly the lack of foraging and the plants to forage on when the weather stays cold and snowy for too long.

No lack of forage in my area!  The bees have been feasting on Purple Dead Nettle, Henbit, Red Maple, Eastern Red Bud, dandelions and soon the Tulip Poplars will be blooming.   My hives were very healthy coming out of winter.  I chose to insulate the hives and it really paid off.

So far I have completed 2 splits and caught a swarm.  I lost one hive during the winter…(a hive that I knew that I would lose….it was not healthy going into winter)  That left me with 3 very healthy hives.  Two splits and a swarm, puts me at 6 hives.  More bees than I really want to have, but a friend who is starting beekeeping will probably get one of them.

With temperatures around normal (day & night), lots of things popping out of the ground and some already blooming and a nectar flow just around the corner, it appears to be a good set up for a Honey crop.

TIME TO FIGURE OUT MY HIVES.

Because of my success with insulating my hives during the winter, I decided that I wanted to keep bees in a different type of hive, but whatever hives that I chose…there would be insulation involved.  After all, your house is insulated in both summer & winter for better temperature regulation….right?

Switching equipment is not that easy.  Having all the same equipment is beneficial when one hives needs something that another hive has an abundance of.  When you start using different types of hives, it makes it more difficult to share resources.  I also had to think about the fact that my extractor held Langstroth Supers and Deeps and I really did not want to have to buy another extractor.

I started to research a Horizontal Hive configuration.  Yes, the size of the frame would not let me use it in my current extractor, but then I found a group on Facebook that was constructing Long Langstroth hives (to mimic the Top Bar Hive) and they were also constructing Double Deep Langstroth Hives (to mimic the Horizontal Hive and the Top Bar Hive), I got excited.  This Double Deep configuration would allow me to delve into Top Bar configuration, but keep the size of frames that would fit in my extractor.  These hives were very big and would allow the growth of the colony or with divider boards, I could have a full size colony on one side and a Nuc in the other.  I liked the possibilities and the diverseness of this new hive idea.

​Whatever configuration that I chose, I wanted them to be well insulated so that I did not have to put insulation on in cold, or take it off when it warmed.  My bees would have a hive that kept them warm in winter and cool in summer.

The hard part….finding someone to build these hives for me!!  A gardener, yes….a carpenter, No!!

I asked 3 or 4 different beekeepers that I knew that built hives and explained to each one what I wanted.  I had no idea what the materials would cost or how much labor that it would take to build what I wanted.  I had plans for building it from a couple of different sites, but there were variations ….like the insulation and how to attach 2 double deeps together.  I gathered pictures of what I wanted it to look like from the Facebook page and continued my search for someone to build it.

Finally, I found someone that was a contractor and a beekeeper, that understood what I wanted and also understood and believed that insulating a hive was a component to healthy bees!!

After many conversations over email, messenger & phone messaging, explaining everything so that he fully understand what I wanted, he agreed to build it.  He had also been designing a hive that was of the Langstroth configuration that was super-duper insulated……so I knew that I had the right person for the job!!!

His name is Marty!  Marty worked on the hive, in his spare time, for about a month.  Finally, he sent pictures of the Double Deep Top Bar Hive.  He had christened her….BIG MAMA!!!! 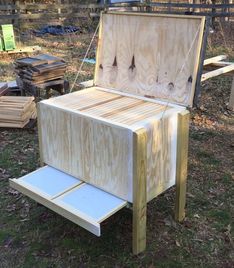 She was Big and Heavy!!!

This Big Mama holds 48 Langstroth Deep frames (24 frames that are double-2 frame deeps).  She has 2 divider boards so I can control the size of the hive and even have a full hive on one side while I start a Nuc on the other side.

This is a hive that once it is placed where I want it, I will not be moving it!!  The drawers at the bottom are for pest count and it can be brushed with a thin coat of oil (mineral or coconut oil which does not turn rancid in the hive).

I am still contemplating what paintings I will be placing on “Big Mama”!!

“While discussing the particulars of “Big Mama”, I decided to ask Marty about the hive that he has been designing.

After talking, I decided that I wanted one of those too…(Yes, like a kid in a candy store!!)  After all, I had 2 nucs that needed homes.

This hive was a super insulated, thick walled Langstroth, with pull out pest drawers and a dehumidifying inner cover.  The inner cover can hold shavings in the winter to absorb the moisture in the hive or dehumidifying crystals to reduce the humidity in the summer.

While I contemplated the design of “Big Mama”…I got to work painting and preparing this second hive for a Nuc that desperately needed to be expanded into a new hive. 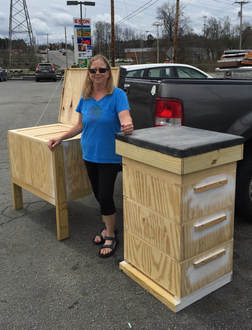 A NEW HOME FOR MY GIRLS

This is after a week or more of painting and designing……. 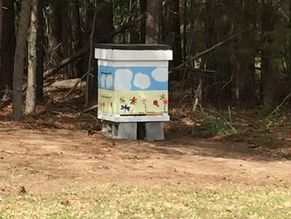 The girls took to the new hive very quickly.  I think that they like it.   The 2nd box is only for feeding purposes at this time.  There is a feeder in the 2nd box to prevent robbing.  As they grow, frames will be installed in the 2nd box.

There is a place cleared and all ready for “Big Mama” as soon as I get her painted.

​Stay tuned for future posts…..and How to get a frame full of bees and brood attached to the Double Deeps!?!?!

There is so much truth to that statement and 2021 is not exception. We have had some pretty wild weather so far this year and

The Bees are asking you, as a land owner, as a gardener, as an inhabitant on this place that we call Earth, to PLEASE, PLEASE